It is no secret that MalaMala has some of the best river frontage of any reserve in the country, with around 24km of prime game viewing habitat on the banks of the Sand River. The vast majority of our reserve sits east of the river while all three of our camps are on the western bank. It is therefore inevitable that we need several crossings to gain access into the east. However, in the summer months, when the Sand River swells and water levels prevent us from crossing through the sandy crossings, we have to revert to our low-level causeways as well as the infamous West Street Bridge.

Over the years, different leopards have occupied the area around West Street and we have had many a sighting of these predators both under and on the bridge. The West Street male spent a lot of time here as a young, newly independent male. So much so in fact that he was nicknamed ‘Concrete’ before receiving his official name. However, in recent times the Accipiter male and the Inyathini male ‘set up shop’ on opposing banks and neither male made much (or any) use of the structure. To our surprise, the bridge now appears to have a guardian again - a new male leopard seems to have taken up the post. He first made brief appearances a few months ago, his skittish behaviour leads us to believe that he was born and raised in the adjoining Kruger National Park. But sightings have become more regular since and the fleeting glimpses slowly gave way to lengthier but distant sightings. This was until recently when some very lucky guests got to witness a saga unfold only meters away and we finally got a good look at the newcomer.

This is the story of the sighting that finally allowed us to take a closer look at this beautiful new member of the MalaMala family.

My guests and I had enjoyed 3 days of great game viewing with numerous sightings of all the Big 5 as well as many of the other 50+ mammals that inhabit MalaMala. On the last drive of their stay we came across a single member of the Kambula pride lazing about just north of the bridge…

The sun was descending and we decided to stay with the lioness into the evening, she was alert and looking around with intent. We settled upstream from her, cameras primed, ready for the many poses she was to bequeath on us. An hour passed and the lioness seemed to keep looking westward but did not move from her bed in the sand, absorbing the last of its warmth. As the sun dipped below the horizon, something behind us snapped (literally). The lioness arose and without any trepidation began moving rapidly towards the western ramp of West Street Bridge. Springing into action we followed as quickly as the sand would allow our Land Rover to move. 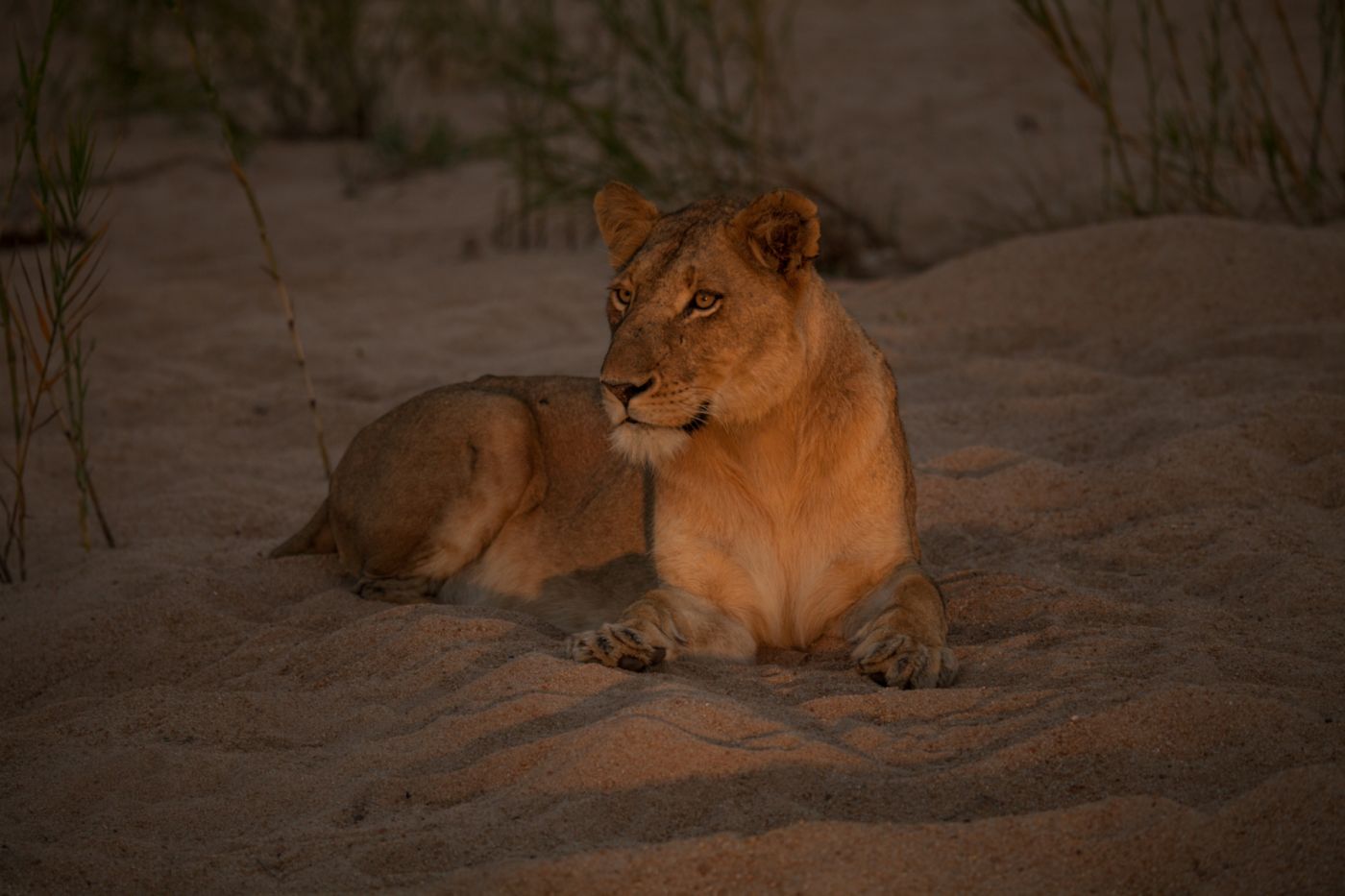 The moment the Kambula lioness noticed the Nkoveni female leopard

We saw a flash of a tawny cat and then to our surprise the familiar rosettes of a leopard. By the time we got the vehicle to the commotion, the lion had treed a female leopard (the Nkoveni Female). The leopard, now perched safely amongst the treetops, was visibly uncomfortable. As a guide I thought that she was just upset after being chased by her rival... it was a normal assumption to make. Lesson time: never just assume anything. 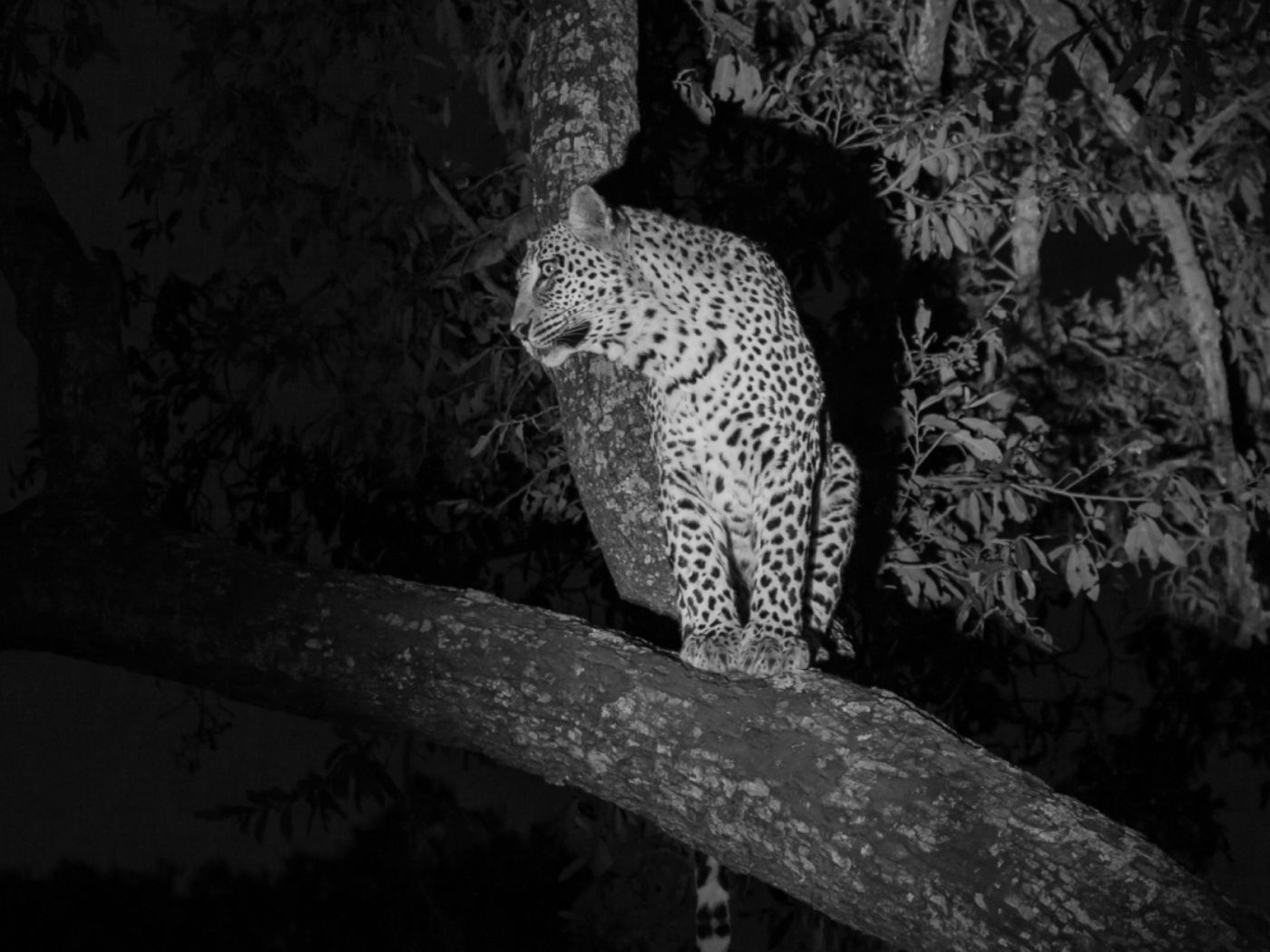 Shortly after the lioness disappeared northwards, the leopard swiftly and silently descended the tree. Without checking to see if the area was lion-free, she began moving off, nose down, brushing over the grass, seemingly onto a scent. Not more than 100 meters further, she started growling and to our surprise had led us straight to a male leopard. He was perched comfortably in the bottom fork of a large Marula tree, looking down on the agitated female. She was quite evidently keen to ascend the tree, but her path was blocked by the big cat. A growling and hissing match ensued for quite some time as she circled the bottom of the tree. Eventually she decided to move off and give him some space. Well, it was a trick.

A few minutes passed before the male decided to climb down and move off. His dismount was not as elegant as one would assume a leopard capable of, and he landed with a thud. It was to this sound that the female, who had been hiding in the reed bed on the side of the river bank, responded. She came bounding towards him, but he was not as keen to engage and trotted off. Several times he would hide in the grass and a sort of cat and mouse (cat and cat...?) game ensued. Every time the female would approach, there was impressive growling, hissing and the odd slap form a well-placed paw.

The question arose as to what behaviour we were witnessing?

Well, my take on the interaction at hand goes as follows. The young male, estimated to be around 3 or 4 years old, would’ve spent a large part of the last year or so alone, a solitary cat, as is the nature of adult leopards. He most likely left his mother’s territory in search of a place for himself. While doing this he has had to avoid other male leopards who would be much larger than he is. The male has found a spot on MalaMala, however, he finds himself sandwiched between other established cats like the Inyatini male, Senegal Bush male, Accipiter male and Flat Rock male, none of whom would be accommodating to this newcomer, as he is now a threat to their established territories and potential mates. Such fears would not be entirely unfounded, as the Nkoveni female probably picked up his presence by scent and was clearly keen to become more familiar with the new man about town. He could possibly be a new male she can mate with and if he happened to find cubs of hers, he would be less likely to kill her offspring if he thinks there is a chance that the offspring is his.

To my mind this would explain why the two cats were torn between going their separate ways (which they could easily have done by just trotting off into the distant moonlight) and circling back towards each other, intrigued. They both chose to move away from each other periodically, but not far enough to lose contact, apparently conflicted between remaining solitary and the need to get better acquainted.

It turned out to be a great last drive, not only because of these interactions, but because it allowed us to take a closer at the ‘skittish male’. We captured some ID shots and gained valuable insight into other aspects of this secretive cat’s behaviour.

He hasn’t been around long enough to earn his place amongst the famous leopards of MalaMala... yet. Before that he will need to better establish himself, start patrolling a territory and claiming a little piece of paradise to himself. Hopefully, for many years to come.