The world’s most trafficked mammal is one that many people have never even heard of. Amidst the catastrophe of wildlife poaching and trafficking, where animals such as rhinos, lions and elephants often take the spotlight, this very small creature is mostly overlooked. There are eight different species of this, the world’s only truly scaly mammal, and they are all threatened with extinction.

This means that an entire taxonomic Order, the Pholidota, faces going the way of the dodo and most people would never even have known that it existed. One of the eight species occurs on MalaMala Game Reserve; Smutsia temminckii, the Temminck’s ground pangolin.

What is a pangolin? In short, it is a scale-covered mammal that is primarily nocturnal and has a diet consisting of ants and termites. These overlapping scales form a shield to protect the animal from its predators, mainly big cats such as lions and leopards. When threatened the pangolin will curl up into a tight ball that is almost impenetrable. Sadly, these scales do not protect the pangolin from its greatest threat, humans.

Since the year 2000, it is estimated that more than 1 million pangolins have been poached from the wild and trafficked globally. Much of this illegal trade has been destined for China and Vietnam and largely involved the meat and scales of the Sunda pangolin, which is native to Southeast Asia. The driving force behind this is partly the demand for their meat which is considered a delicacy in some countries but mainly it is for their hard, keratinous scales that are (falsely) believed to yield magical medicinal qualities, which they most certainly do not. Pangolin populations in Asia have dwindled drastically in the last decade and a worrying trend has emerged as a consequence; the development of intercontinental trafficking of African pangolin scales to Asian markets.

So, is there light at the end of the tunnel? We hope so… Despite such challenges, there is cause for optimism. The profile of pangolins has increased enormously in recent years as concern for the fate of the species has grown. While a few years ago pangolins would have been described as a forgotten species, they are now increasingly iconic. This, in turn, has led to greater attention from governments, NGOs, civil society organisations and conservation scientists, and an increase in much needed funding support for conservation action. Earlier this month, the Chinese Government announced that from January 1st 2020 it will no longer allow the sale of medicines derived from or including pangolin parts. This is a major step forward. Currently the Chinese Government approves the use of roughly 29 tonnes of pangolin scales, equivalent to about 73000 pangolins, annually. Given the complexity and dynamics of pangolin trafficking, saving the animals from extinction will require a multi-pronged approach. The enforcement of applicable laws by well-resourced enforcement agencies is critically important, both at the site level and along trafficking routes, as is appropriate legislation, and countries are making changes to ensure that pangolins have the necessary levels of protection. Trying to change the way customers behave in order to reduce demand for wildlife products is a relatively new concept in conservation, and determining how to actually change consumer behaviour away from specific wildlife products is challenging. Current thinking suggests that it can be done by gaining an in-depth understanding of consumers and their motivations, influences and influencers, and by conveying the correct message through the most appropriate means of communication to alter future behaviour. One commonly used tool is to secure the support of celebrities, Jackie Chan for example, to act as the messenger, but we have yet to see how effective this method will be. 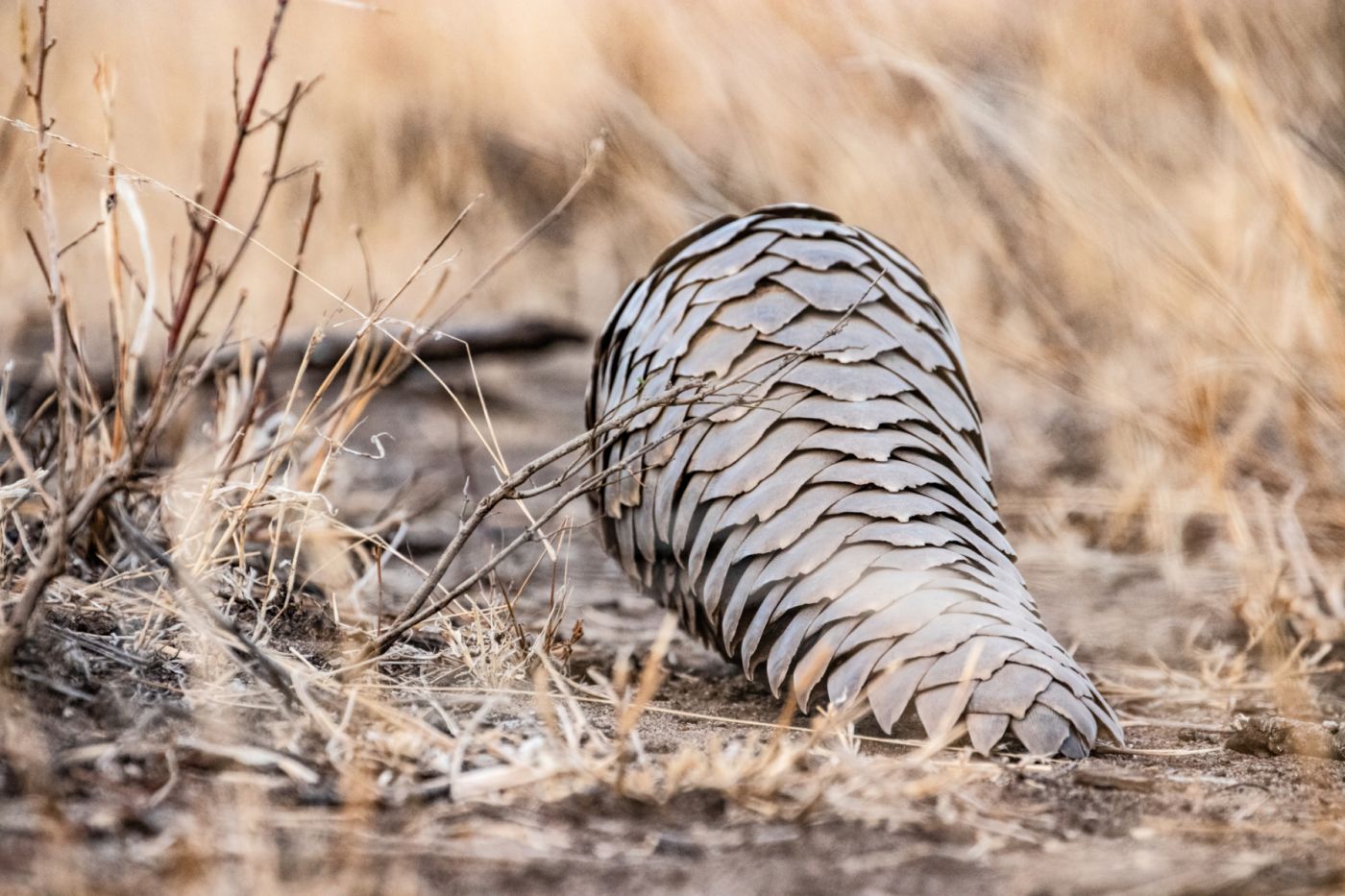 It is often said throughout the industry that pangolins are most frequently seen through the driest months of the year and this seems to be quite true, at least at MalaMala. Rangers have, over the last three months, been delighted to introduce a number of guests to their very first pangolin, an incredible privilege shared by a lucky few. Just as the sun starts to set the pangolin gets active, it leaves his burrow in search of ants and termites. An incredible animal to observe as it walks along the ground on its two back legs and clasps its two hands together, stopping every now and then to sniff the ground in search of a tasty meal. When the pangolin detects its prey, it starts to dig and then sticks its long sticky tongue into the underground passages created by the ants or termites, swallowing them whole along with a little sand which is then ground down in its gizzard.

We hope that by educating our guests as well as the local communities we can protect the pangolin and all the other creatures on MalaMala.