Whilst enjoying a cup of coffee in the early morning before the game drive, the peaceful atmosphere on the deck of Sable Camp was shattered by the unmistakable sound of a buffalo bellowing in distress. Our excitement levels went through the roof and although we love our brew of coffee, our cups were dumped in a heartbeat as we geared up for safari!

Ranger Mike Kirkman was first to make his way down to the Sable Rotunda and as he crossed the little wooden footbridge, he noticed two hyenas running towards the area from which the bellows were emanating. As his eyes scanned further ahead he noticed a young male lion latching onto the rear end of a buffalo with a male leopard a mere 20 meters away! Everyone was safely ushered onto the Land Rovers and we made a beeline to the action. 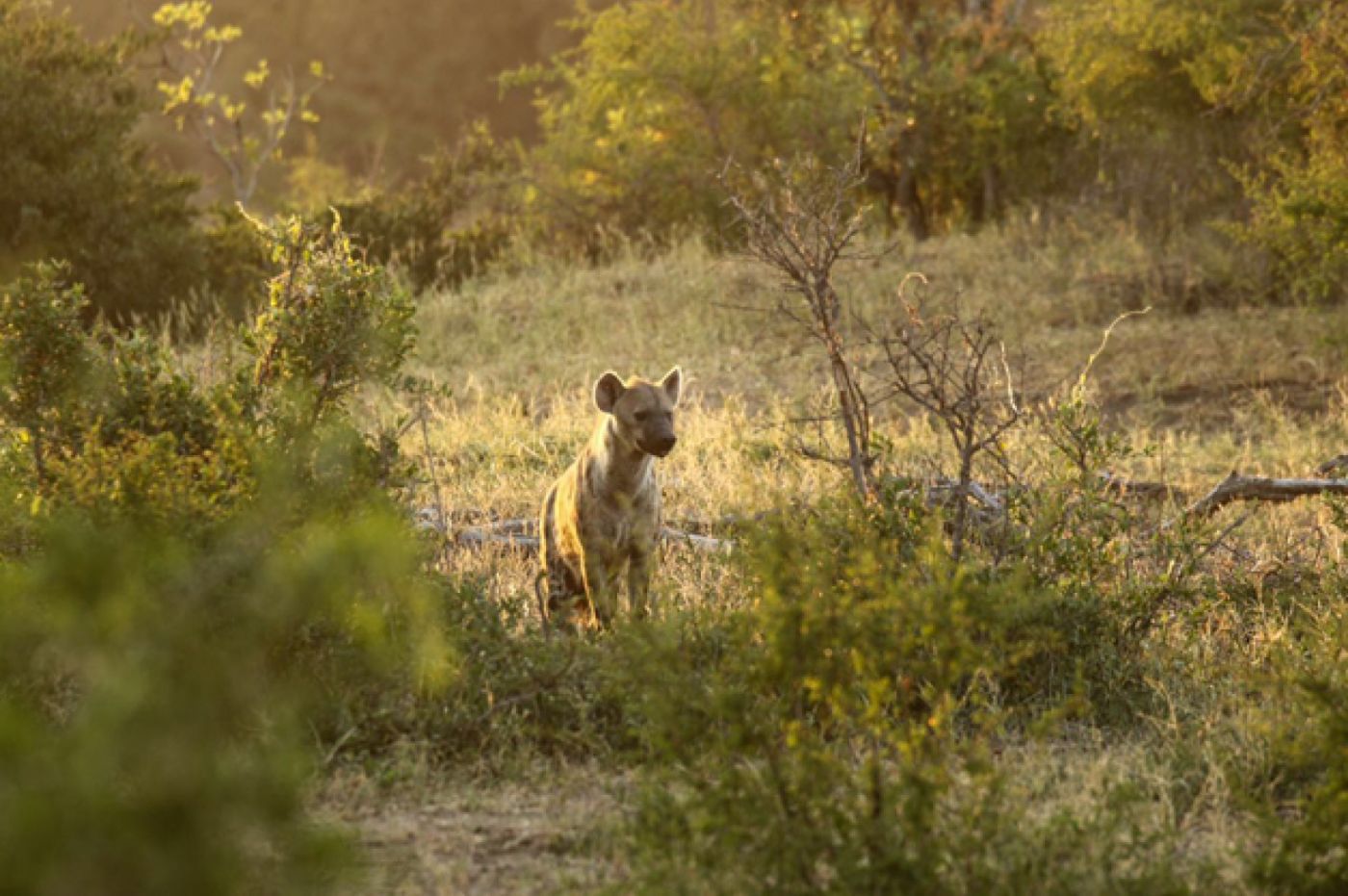 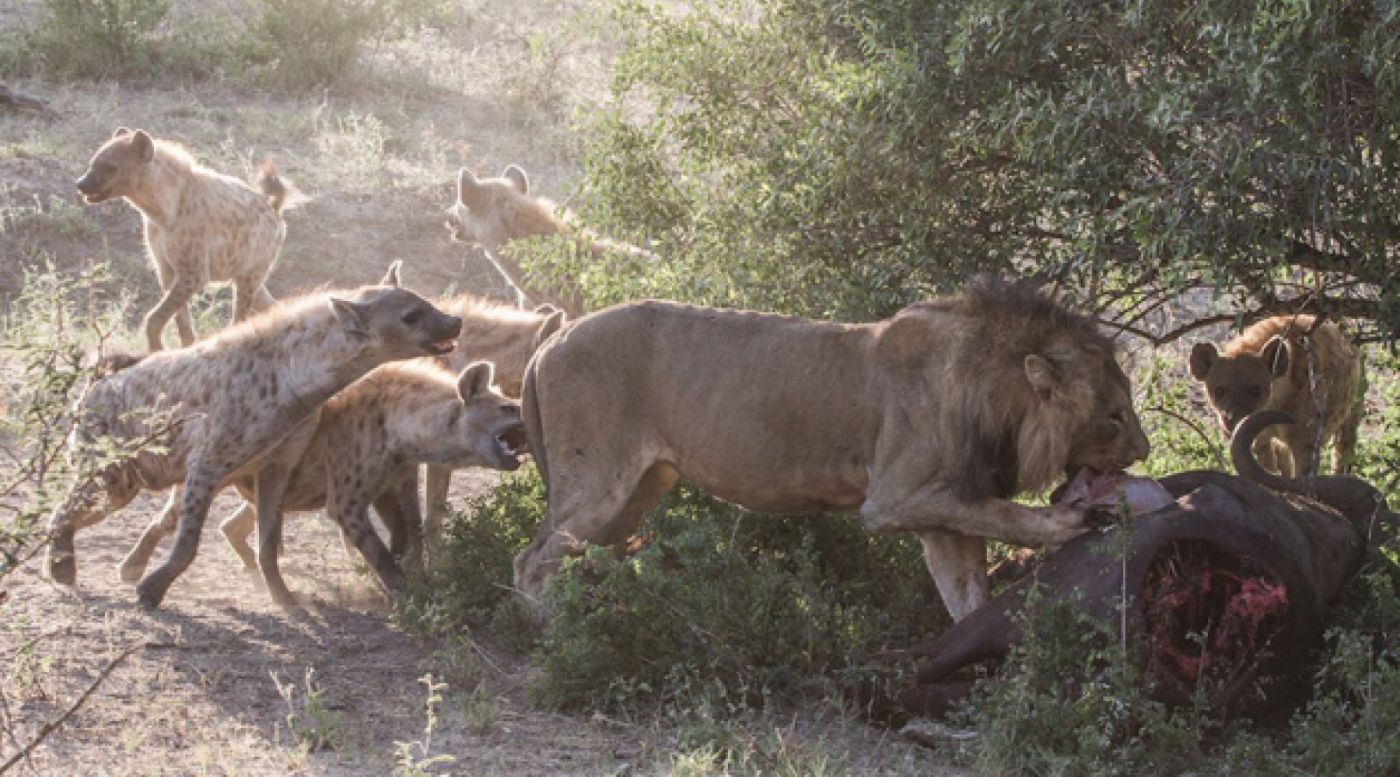 The young male lion had started to feed off the distressed old buffalo bull (the previous day we had noticed what looked like a very sick buffalo in the area and we assumed this was the same animal). The two hyenas had arrived on the scene and were whooping incessantly. The male leopard was still 20 meters away looking on through thick bush from an elevated vantage point. To add to the drama we could hear other lions roaring from the east and west. The hyena calls were being answered and soon a sighting with two hyenas became a sighting with over 20. Their noise alone was exhilarating. 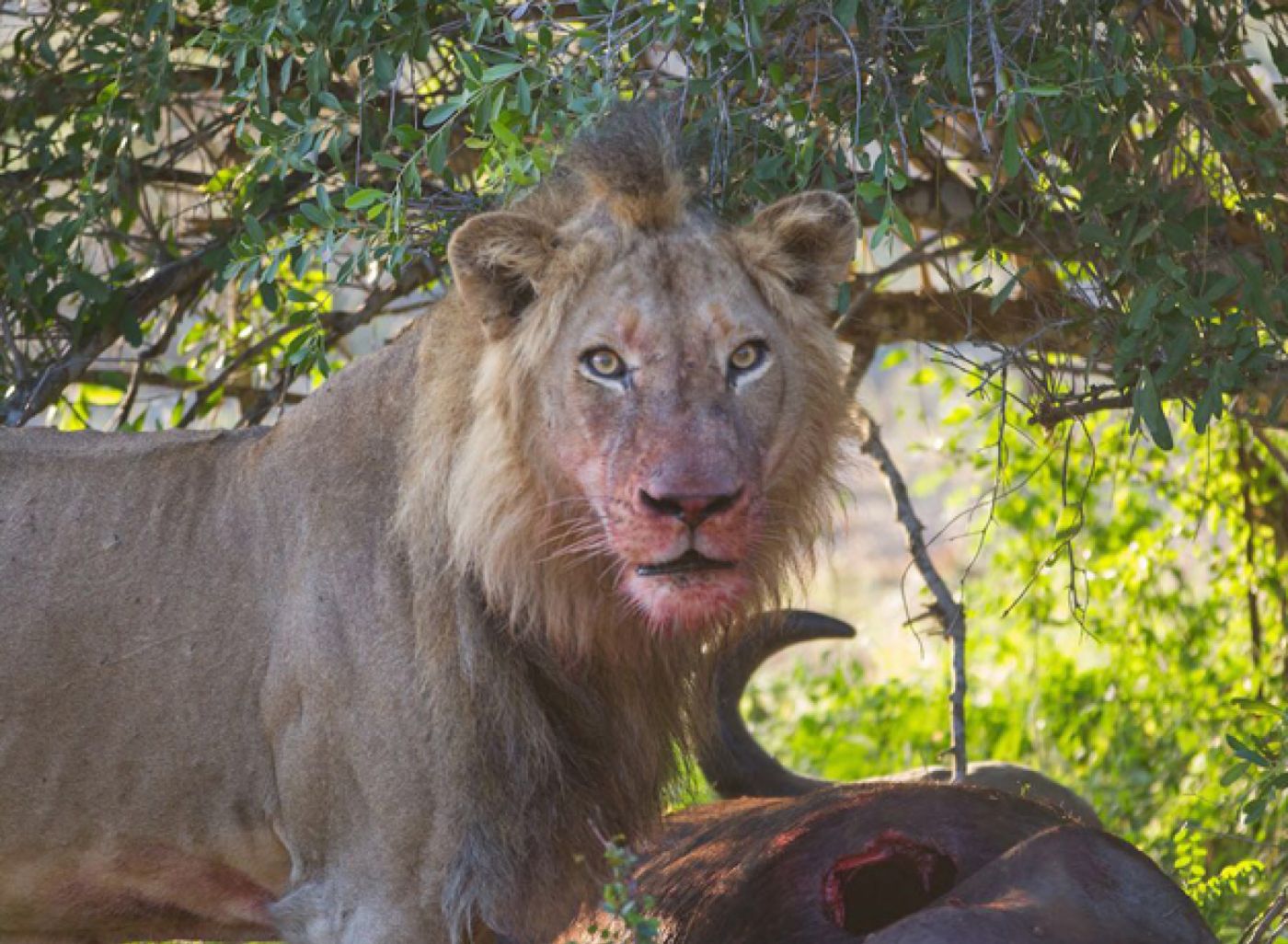 The lion, probably realizing that his time at the dinner table was soon to expire, proceeded to ignore the madness around him and gorge himself. The excited mob moved in as the buffalo drew it’s last breath. The braver the hyenas became, the closer they got and soon half a dozen of them were beginning to take bites at the lion’s tail and rear end. Every now and then the lion would turn around with a disgruntled growl and charge at the hyenas before returning to feed.

The pestering soon got worse and one hyena actually bit off half of the tuft at the end of the lions tail! Enough was enough; the lion surrendered the carcass and moved off and the hyenas ran in. The leopard had snuck off at some point during the action. 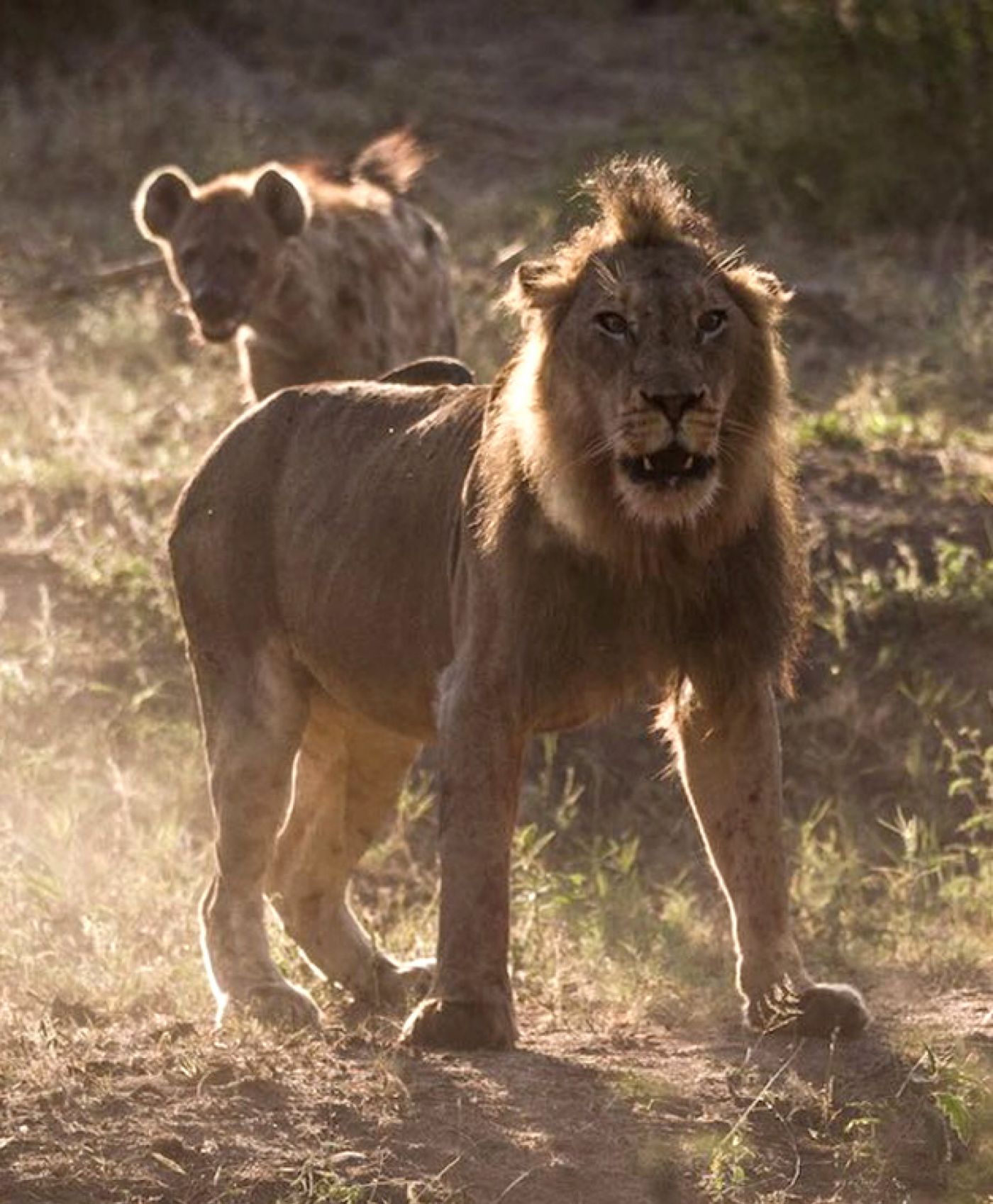 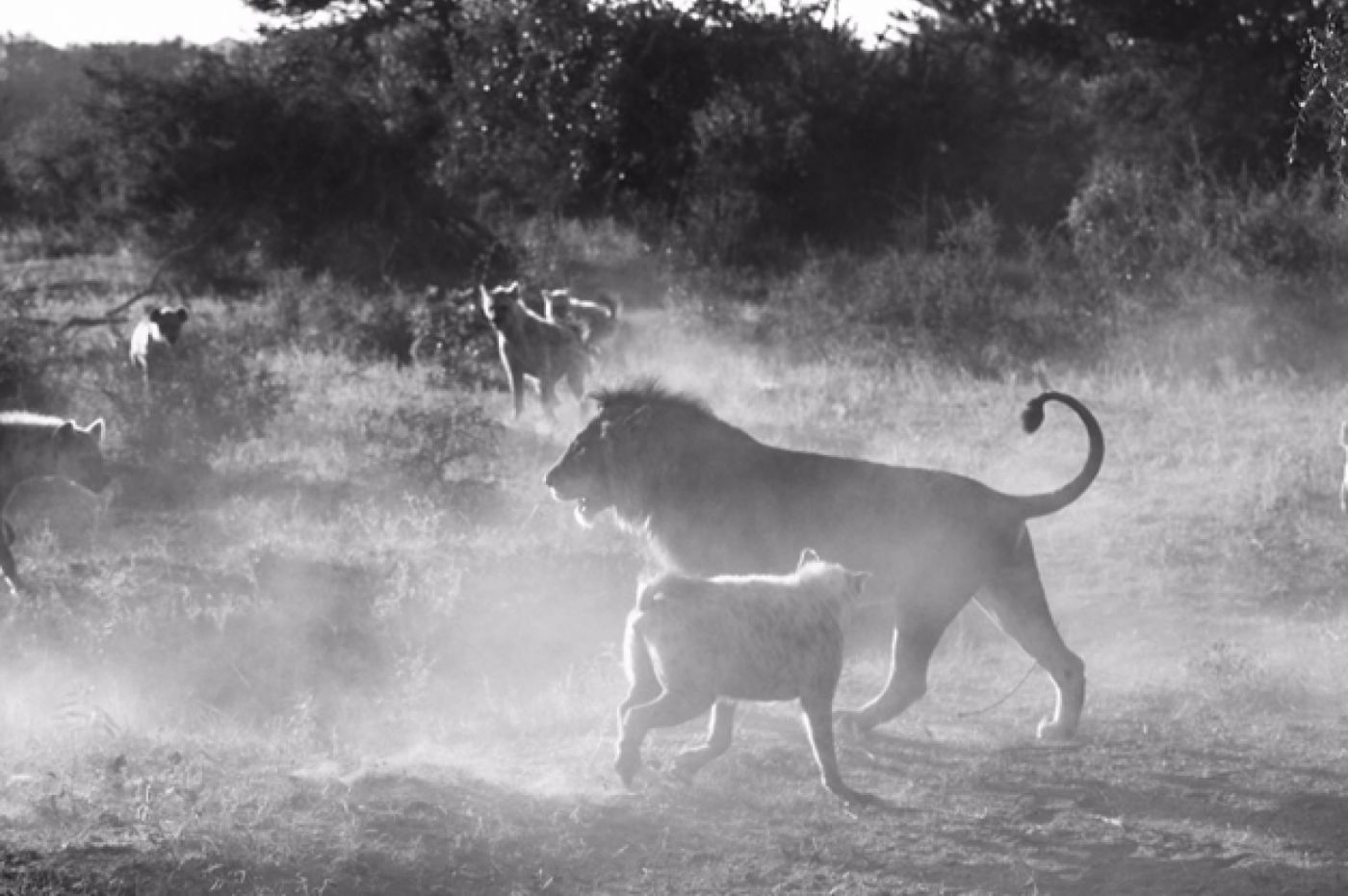 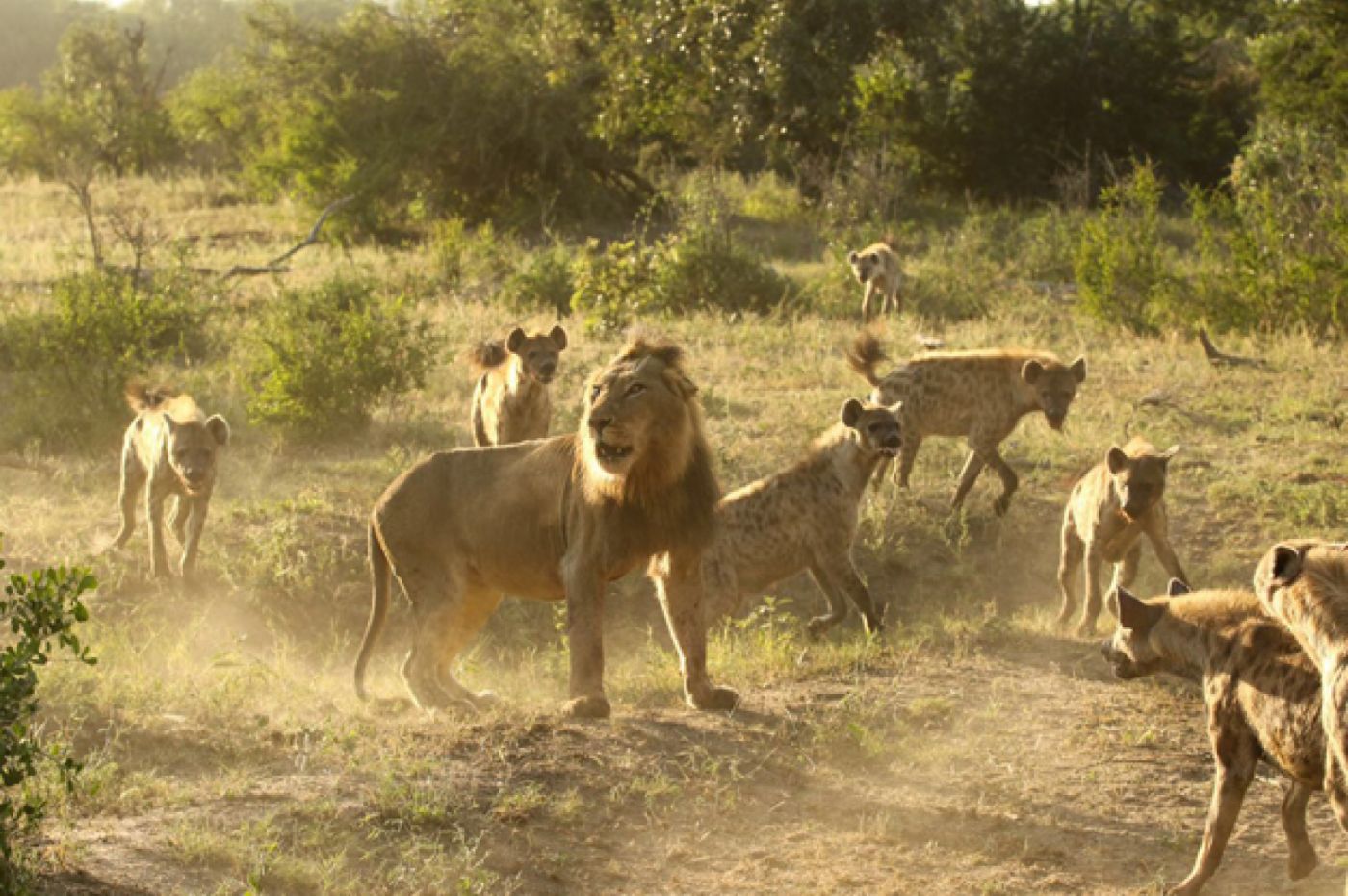 As it was now the hyenas turn to feast, their time at the dinner table ended in stark contrast to the manner in which they attained the meal. The two Matshapiri male lions came barging in from the east and the hyenas ran for the hills. And that was that, the two large male lions claimed the carcass and fed off it unhindered.

Note: We have yet to confirm the ID of the young male lion but it appears to be one of the young males from the ‘Talamati’ pride, and although we didn’t get a good look at the leopard we believe it was the Treehouse male.