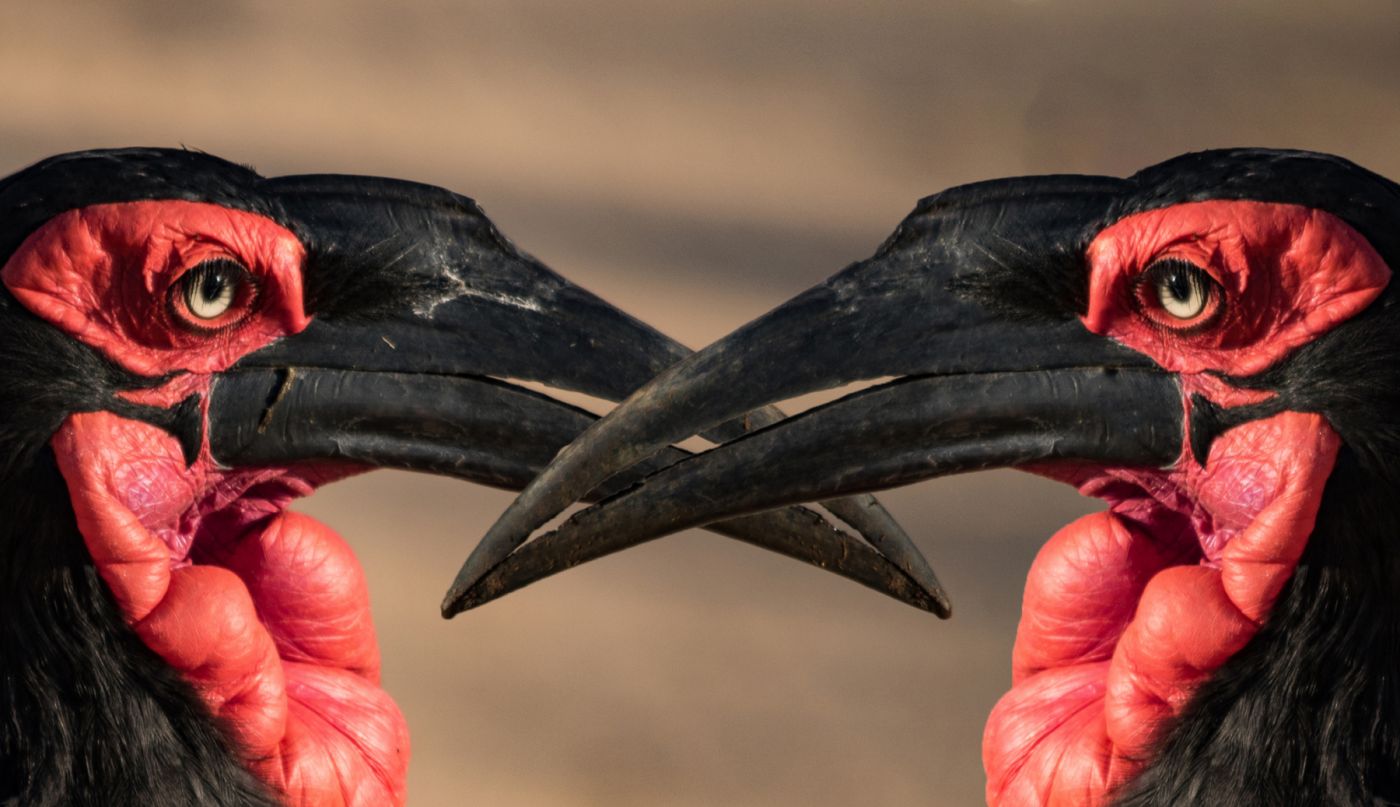 A series of repeated low grunting notes, not unlike the sound of a distant lion, greets the sunrise and adds some bass to the dawn chorus. A flock of prehistoric-looking birds emerge from the thickets into open grassland and stalk across the ground like undertakers at a funeral, their bright-red necks a startling contrast to their solemn black bodies. They’re chatting to each other in a boom-box beat, like djembe drummers on a go-slow. This beautiful yet haunting sound is regarded by many as ‘the call of the bushveld’ but it runs the risk of fading into the eternal silence of extinction.

Southern Ground-Hornbills are currently listed as ‘Endangered’ by the IUCN (International Union for Conservation of Nature) and are close to meeting the criteria to be on the IUCN Red List as ‘Critically Endangered’. Here at MalaMala we are fortunate to record relatively regular sightings. We recently hosted two members of the Mabula Southern Ground Hornbill Project (MSGHP), as well as a number of their donors, to give them a tour of the nesting sites on MalaMala. MSGHP is a non-profit organisation dedicated to conserving these incredible birds. It is, of course, brave and honourable (and important!) to spend one’s life trying to save the African rhino, the mighty polar bear and the whales for which our conservation hearts continuously mourn. However, MSGHP and others like them are the unsung heroes who care for the other, lesser-known but equally important species.

You will often come across a flock of hornbills walking in a group. If you’re lucky you may see a male collecting gifts for a female that he wants to impress, a nice rock or a tasty lizard snack. By accepting the gift the female then accepts the male as her life-long partner. The breeding cycle that follows is at the crux of the species’ dilemma…

Hornbills nest in tree cavities and as you can imagine the cavity needed by a Southern Ground-Hornbill family needs to be quite large inside, at least 40cm (16 inches) wide to be exact. These cavities are not created by the hornbills themselves, more often than not they are natural cavities or they have been excavated over time by other animals. Trees with suitable cavities are in increasingly short supply due to human activities as well as elephants and it is now of the utmost importance that we protect what remains. The team of researchers protecting these birds have come up with an ingenious way of helping them out. They’ve designed nesting boxes which they attach to large trees in areas where they’ve identified a family of birds that has no suitable trees for nesting.

The female will lay two eggs a few days apart, the first egg will hatch and is then followed, about five days later, by the second. Sadly, the older of the two chicks will often out-compete the other, which results in the younger chick perishing. This is so that the family group can spend all of their energy trying to raise one chick successfully over the next few years instead of having to split their efforts between two chicks. On average, attempts to breed are every 2.6 years, but the average overall fledging rate in this area is only one chick per group every 9.3 years!

This is where the MSGHP researchers come in again. They monitor certain nesting sites and as soon as both eggs have hatched, they set out to ‘harvest’ one of the chicks. This chick is then hand-raised until it is ready to fledge. It is then released into a family group where it learns how to be a hornbill. These groups are then released back into the wild. This is the fastest way to help the population grow, instead of only one chick surviving from each family group we now have two. A bird in the hand leads to two in the bush. So far the project has been successful!

The team of rangers now documents sightings of these birds as well as their group size, composition and their activities. This data is then sent to the Mabula Southern Ground Hornbill Project for their research.

How you can help:

How others have helped:

A 2014 study explored cultural beliefs and practices related to the Southern Ground-Hornbill in nine southern and east-African countries. The main themes that emerged from the data analysis indicated that beliefs and practices relate to these birds being (a) a bringer or signifier of death/destruction/loss/ deprivation, with the bird commonly being regarded as a bad omen of evil spirits and announcer of calamities; (b) a protector against evil spirits, against lightning and against drought; (c) an enabler/causer of altered perceptions, which include remote viewing, foreseeing the future, and creating an illusion; and (d) a timekeeper that announces the beginning and end of a working day and of seasonal changes. This knowledge has contributed to conservation efforts in at least two significant ways: Firstly, beliefs and practices that were identified as having potentially protective consequences for the birds have been specifically targeted and strengthened. Secondly, destructive beliefs and practices are being changed by means of the implementation of an intervention programme in countries where it is needed.