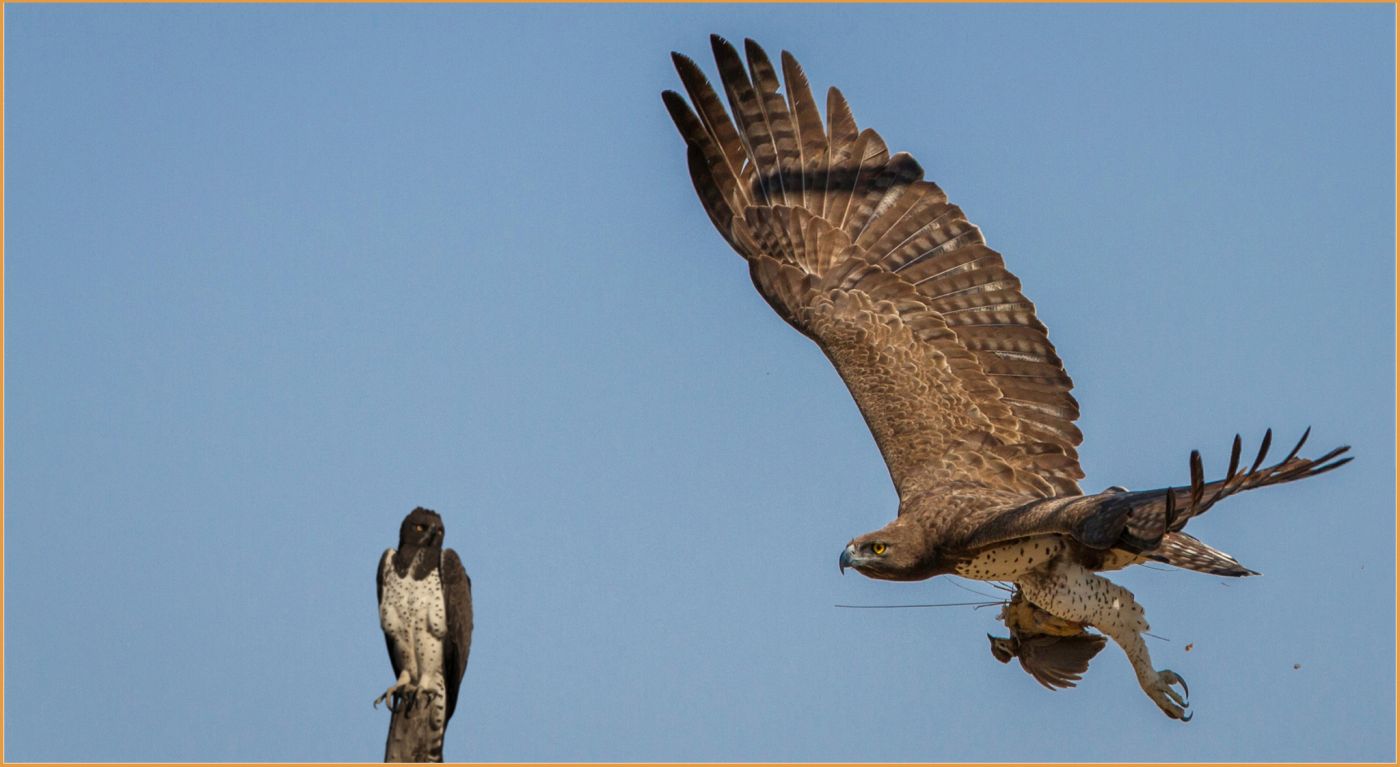 Although the Martial Eagle (Polemaetus bellicosusis) not the biggest or strongest eagle in the world, it certainly is the largest in Africa. Growing to stand head and shoulders above most other birds of prey, the Martial Eagle measures out at up to 115 centimeters tall and when it unfurls its massive wings to take off, they stretch up to a colossal 2.6 meters across. On top of these impressive statistics they weigh in at between 6 -10 kilograms and have immensely powerful talons equipped with four impressive claws measuring up to 2 inches long, which are used to crush and disable prey. Martial Eagles are by no means common birds and sightings are usually fairly rare throughout their sub-Saharan distribution range but any person who gazes upon these birds are struck with the same sense of majesty. Just its name alone bears justice to its fierce nature as the word martial is derived from the Latin word, martialis, which means "from Mars" who was the Roman god of war. Their normal prey includes most small to medium sized animals that occur within its kingdom and these include; rodents like large rats, rabbits and hares, game birds such as Guinea fowl and Spurfowls, monitor lizards, mongoose, monkeys and small baboons and they have even been observed catching and killing small antelope such as steenbok, duiker and impala lambs.

Their eyesight is extremely keen and has been proven to be more than 3 times the acuity of human eyesight. Because of this amazing skill, they can spot prey up to 5km away. They have fairly large territories and are monogamous; both male and female birds will fiercely defend their territories from other large birds of prey.

Martial Eagles have a rather varied breeding season, which is commonly dictated by the availability and abundance of prey. In Southern Africa the mating season for a pair is generally around November with the birds usually returning to the same nest site year after year. The nest is a massive collection of sticks and broken tree branches set atop a tall tree, usually the tallest tree in the area. The interior of the nest is lined with soft green twigs and leaves and then the female bird lays a single egg, which she will incubate for 45 to 52 days. Once hatched, both devoted parent birds feed the chick regularly each day and therefore the youngster grows rapidly. Generally the chick will fledge in a little over 100 days and will still be reliant on its parents for food for some months thereafter. Due to the strenuous system of rearing their young, these birds only tend to raise one chick every two years.

Listed as 'Near Threatened' due to a major decline in numbers over the last few years, this eagle's greatest threat comes from an ever-expanding human population that results in habitat loss. Farmers also view them as a killer of livestock and many birds end up poisoned or shot despite the fact that farm animals make up a very small part of the eagle's diet. Educating farmers and an increase in protected areas are vital to the survival this iconic species.

So when you next find yourself on safari and happen across the mighty Martial Eagle, be sure to reach for your camera and snap a few shots while you can, for you never know if or when you may see one again in the future. Remember also to take a moment to admire this bird's majesty and effortless flight, bearing in mind some of the facts that you have now learned. Behold, the lord of the African sky has graced you with its presence.