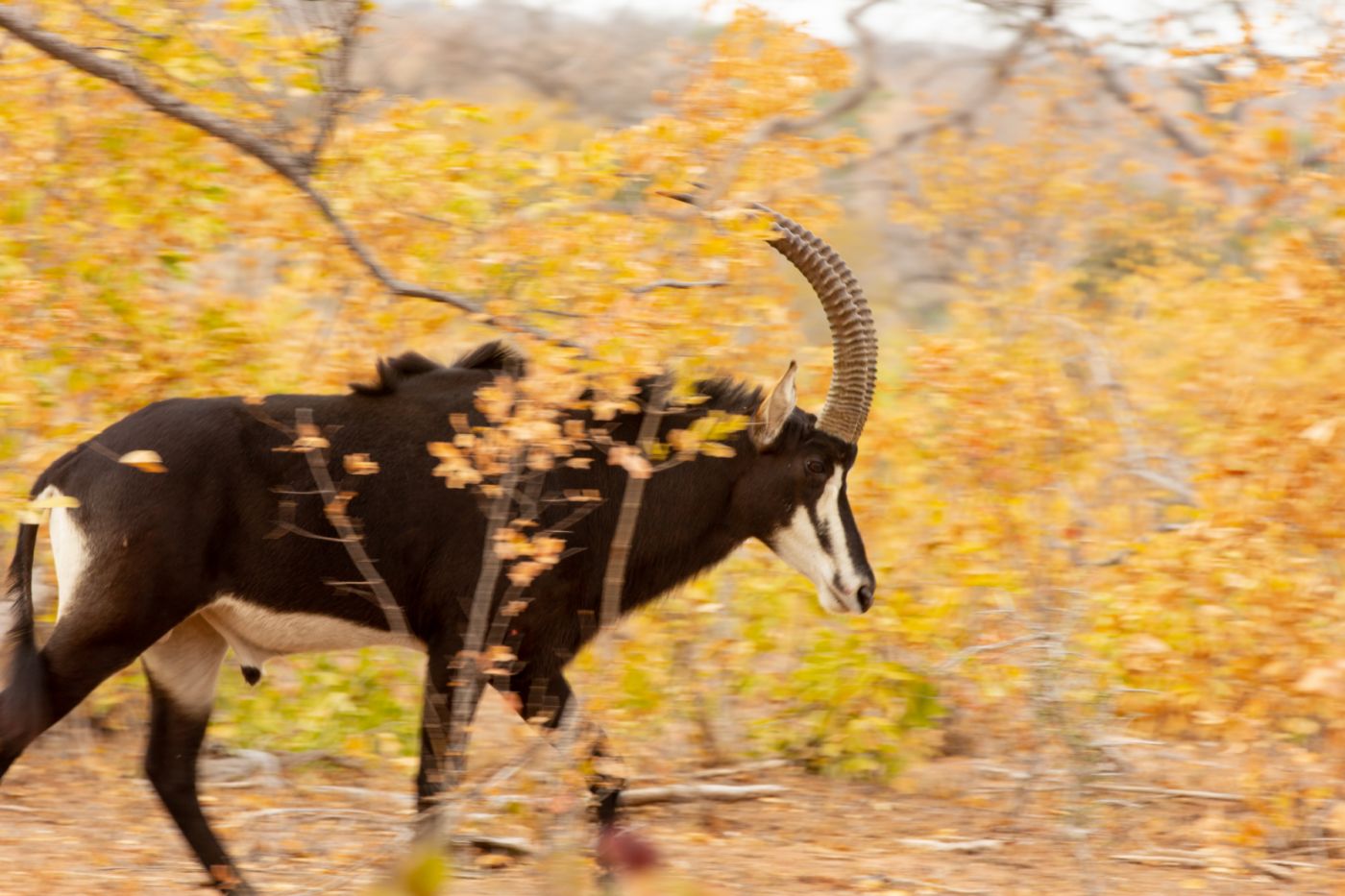 With the onset of our dry season MalaMala has become quite… well, dry. And dusty. The rains will only fall again in November and so, in the coming months, animals must endure ever increasing hardships. These include less water availability as well as significantly reduced grazing and browsing opportunities.Some animals will have to undergo daily ‘migrations’ to find enough of these resources to survive. It is during these tough times that we are fortunate enough to record special sightings of the most majestic of all antelope as they seek out the Sand River.

Our reserve shares an open border with the Kruger National Park allowing for a constant variation and influx of animal movement between the two conservation bodies. Primarily animals such as elephants, buffalo, ostrich, Cape hunting dogs and cheetah make use of this vast open network of conservation areas and move freely between them, allowing us to have incredible sightings of these species. Amongst the vast array of animals that traverse back and forth the sable antelope is one of the rarest to find and observe.

‘MalaMala’ is derived from the local name for these handsome beasts. It happened many moons ago when a land surveyor was drawing up the first title deeds for this region. He happened to see a herd of sable and asked his assistant what they were. The assistant replied in the vernacular; “Ximpalapala.” The surveyor jotted down ‘MalaMala’ and the rest is history. The sable antelope is also the official logo of MalaMala Game Reserve and in the earlier years, during the 1800's and 1900's, these animals were widespread across the land. Their populations quickly dwindled due to a variety of primarily human-related reasons. What added to their scarcity here is that a fence was erected between us and the Kruger National Park after an outbreak of foot and mouth disease. The fence was removed in the 1990's and the open network and conservation area now known as the 'Greater Kruger' was restored.

Most of the sable population was concentrated in the northern half of the Kruger National Park, where there is excellent savanna woodlands and grasslands with mid-length grasses and leaves on which sable like to feed. However, MalaMala is able to still have incredible sightings of these rare antelope during the dry season. As the surrounding areas become dry the Sand River pulses and flows with perennial life-giving water.

Small herds and lone bulls make the daily migration from within the Kruger National Park to the Sand River in MalaMala which flows through our reserve for almost the entire property, North to South. During August of last year, we had a sighting of a herd of 23 Sable in the central parts of the reserve, one of the largest herds seen in recent times. These antelope don't normally form herds bigger than 30 as they tend to break up and divide into small groups.

There are roads, paths and game trails in MalaMala which Sable have been using for many years as their ‘migration’ route to the Sand River. The most often used of these is a highway that runs east west to the north of the Kapen River. The route leads the antelopes into the Sand River in front of Rattray’ Camp!

Last week we recorded our first sightings of the season; a herd of seven as well as a lone bull near the Windmill. If history is to repeat itself then we can expect to start seeing more of these rare antelopes.

•Hipotragus niger niger - the Southern sable or common sable. A common reference is the 'Matsetsi sable', the typical sub species as it was the first to be described and named in 1838. It is estimated that there about 7,000 in total including commercially and in Reserves in South Africa

•Hipotragus niger variani - the Giant sable or royal sable. Named aptly due to both sexes having recognizably longer horns. They are found in only a few remaining localities in central Angola and they are classified as Critically Endangered on the IUCN Red List and is listed on Appendix I of CITES

•Hipotragus niger kirkii - the Zambian sable. These sub species occurs in central Angola, western Zambia and Malawi and has the largest geographic range. They are classified as vulnerable

•Hipotragus niger roosevelti - the Eastern sable or shimba sable. This is the smallest of the four sub species. The shimba sable occur in the coastal areas of southern Kenya, particularly in the Shimba Hills National Reserve